I love a classic whiskey sour. It’s one of the few drinks I serve on ice (well, one ice cube anyway) and even indulge in gratuitous garnish (can’t have a whiskey sour without a ‘Fifties-style orange wheel and cherry), but when I want the tighter feel of a whiskey-based sour served up, I prefer this recipe, my variation of the Gold Rush, which first made the scene at Milk & Honey, the groundbreaking craft cocktail bar in New York City. 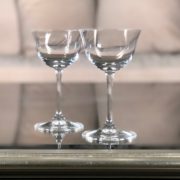 In the small side of a Boston shaker, combine whiskey, lemon juice, honey syrup and egg whites. Shake very well. This is called a dry shake: drinks made with egg whites are “dry shaken,” that is, shaken without ice, first. Thi 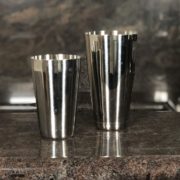 Open up the shaker and pour the liquid into the short side and fill the short side with ice. (If you use the tall side and overfill it, you won’t be able to make a bond when you put the short side on top.) Top with tall side, flip over and shake until it is very cold.

If drinking with a com 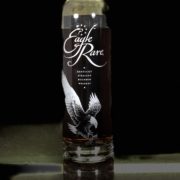 panion, get both glasses out of the freezer and strain the drinks into the glasses. If flying solo, remove one of the glasses from the freezer, strain the mixture into the glass until the glass is full then strain the remaining drink into the short side of the shaker. Dump the strained ice out of the tall side of the shaker, transfer the drink into that, top it with the short side and stow it in the freezer until you are ready to drink it. It should keep well until you finish the first drink but won’t last much longer than that. (For drinks with egg whites, you might want to give it one more quick shake before drinking the stowed drink.)

Top the strained drink with a hearty dash of bitters–smear it, swirl it, dot it…whatever your creative juices call you to do–and enjoy!! 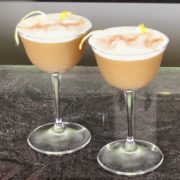 I just discovered the “sour glass” and I think I love it! Unlike a traditional coupe, the sour glass has a flared rim that makes room for the creamy surface of the egg white. A flourish of bitters adds to the traditional sour appeal and I for one welcome the break from my go-to Nick & Nora glasses.