Walking down the street in Newport, Rhode Island, recently, I noticed a beautiful house with even more beautiful lavender bushes in front…they called to me! Later that day, I circled back and saw a man sitting on the porch. It was Mike, the home-owner. I told him how I wanted to take a few branches of his lavender, make some syrup* with it and share the syrup with him…he eagerly agreed! The syrup turned out to be perfect.

With this lovely syrup, I made both a gimlet and a rickey. The gimlet, I made with Roku Gin, and later I made a rickey with Plymouth. With the Roku, I just had to sit quietly and contemplate each sip. It was sublime. The rickey with the low-profile Plymouth, however, was a surprise. Every time I took a sip, it hit me: “Wow! That’s great!” Hope you have the same reaction! 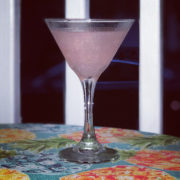 Put two coupes, martini glasses or similar in the freezer.

Combine gin, lime and syrup in a shaker with ice.

For the gimlet: Strain mixture into two chilled glasses.